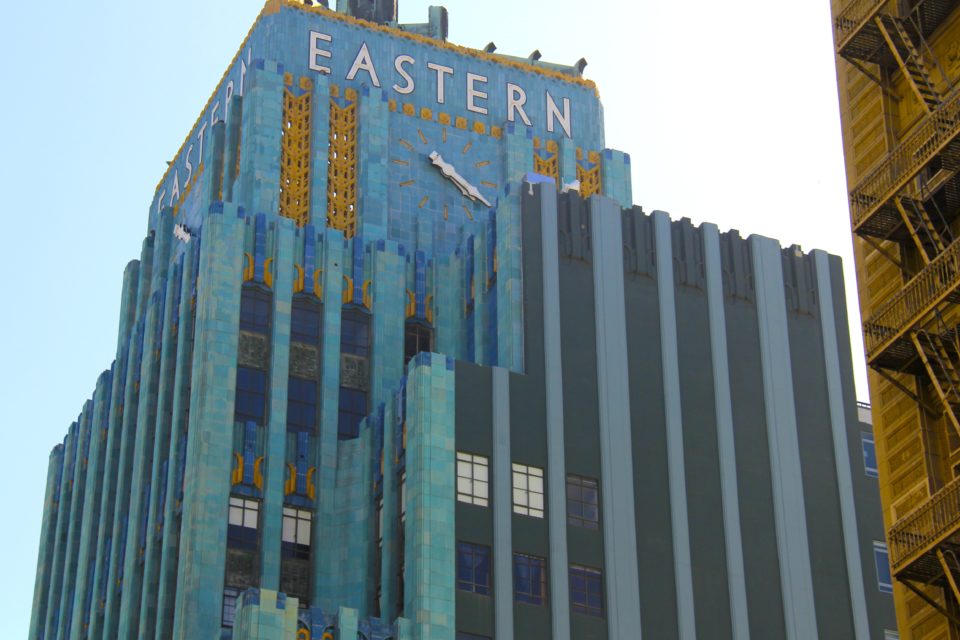 The Eastern-Columbia building at 9th and Broadway is among the most distinctive buildings within Los Angeles’ historic core, thanks to its unique turquoise hue and having been featured in numerous TV shows and movies over the years.

The 13-story reinforced concrete building was constructed in 1930 as a flagship store and center of operations for two retail brands owned by Adolph Sieroty: Eastern Outfitting and Columbia Outfitting. Its Zigzag Moderne design – a spin on Art Deco styling – was helmed by Claud Beelman, who designed several other iconic L.A. structures.

Shortly after the new building opened, Sieroty merged his two brands to create a new department store named Eastern-Columbia. Its flagship store was successful enough to warrant expansion to other locations, as well as a 1950 addition to the original store.

But by 1960, the Eastern-Columbia chain had shut down for good as the Sieroty family pivoted to real estate development. The building underwent around $1 million in renovations to convert it into commercial office space.

In 1985, the Eastern-Columbia building was named as a local historic monument. Unfortunately, the building was beginning to deteriorate as it struggled to attract, and keep, tenants.

This decline continued for years until L.A.-based Kor Group acquired the property in 2004.

The group then enlisted Killefer Flammang Architects to lead a $33 million redevelopment project that would bring over 140 loft-style condominiums to the aging building. Engineering firm Simpson Gumpertz & Heger aided in the restoration of the building’s signature turquoise terra cotta exterior.

Work began in 2006 and by 2008, Eastern Columbia Lofts opened, offering condos ranging from 880 to 3,200 square feet in size. Along with the residential units, the project added a rooftop terrace with a pool, fitness center, and spa.

The redesign won the 2008 Preservation Award from the Los Angeles Conservancy.

Today, the condo operation is alive and well, with several units priced above $1 million. If you can manage to afford the price tag, you get the privilege of living in one of the most iconic examples of Art Deco-style architecture in the world.