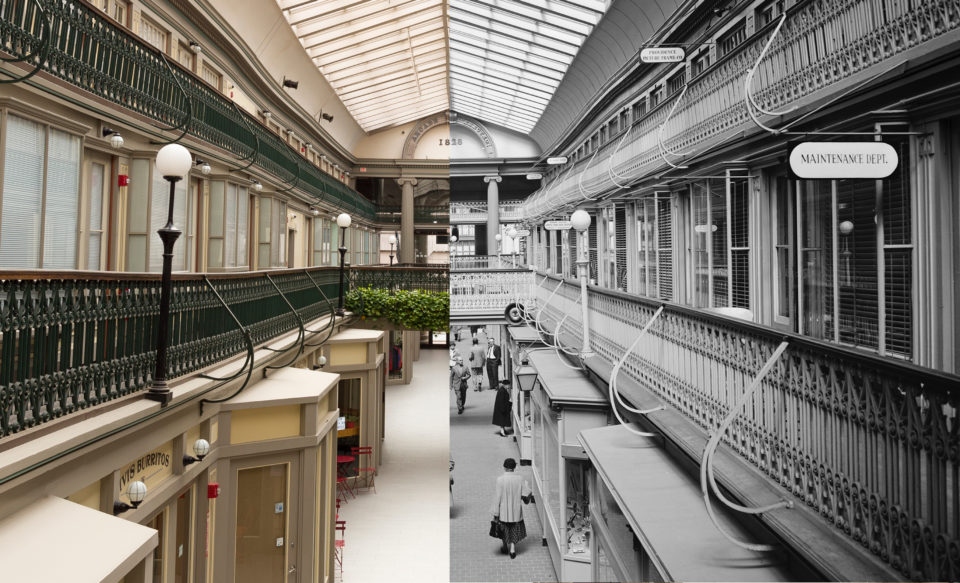 Long before the days of glitzy, sprawling suburban malls, the Westminster Arcade in Providence, RI, became one of America’s first enclosed shopping malls.

The Westminster Arcade, which replicated similar successful concepts overseas as well as a couple of less-successful attempts in the U.S., bares only a slight resemblance to modern malls on its interior – and no resemblance at all on its exterior. Its Greek Revival-styled façade was designed by architect Russell Warren and the firm of Tallman & Bucklin, highlighted by its enormous granite columns made from locally-sourced granite. Its three-story interior housed a pedestrian arcade flanked by three levels of shops and offices. Upper-story shops and offices were accessed via staircases on either end. Skylight openings provided natural light through the arcade, with additional lighting along the walkways and

The building opened in 1828, a joint venture between Cyrus C. Butler and the Arcade Realty Company. Its location along Westminster Street originally made it distant from Providence’s other retail districts, but as shops and office buildings filled in around the arcade, activity soon increased.

After over a century of success, the arcade entered decline in the mid-1900s. It was saved from demolition in 1945 when the Rhode Island Association for the Blind purchased the property. The organization then began renovations within the historic building, which included modifying the storefronts on the first and second floors. The organization occupied a second-floor storefront and continued leasing the rest of the building, but by the mid-‘60s it had relocated to a larger facility.

When the Westminster Arcade was added to the National Register of Historic Places in 1971, it was entering disrepair and struggling to attract tenants.

Irving B. Haynes & Associates and Gilbane Properties collaborated on a project to rehabilitate the arcade building, for which they would later earn an Honor Award for Design from the American Institute of Architects Rhode Island Chapter. As part of renovations, elevators were added to the building’s interior.

The rehab project allowed the Westminster Arcade to continue as-is for several more years, but by 2008 it had closed permanently.

The $10 million adaptive reuse project wrapped in 2013, reopening as The Arcade Providence the following year. The two upper floors are lined by dozens of micro-loft apartments ranging from 225 to 900 square feet in size. On the ground floor, 400-square-foot units house shops and restaurants.

The redevelopment project earned an award from the National Trust for Historic Preservation in 2014 as well as a Congress for the New Urbanism Merit Award in 2015.

The Arcade Providence remains open; you can learn more about it from its website. Its historic building, meanwhile, lives on as America’s oldest surviving shopping mall structure.