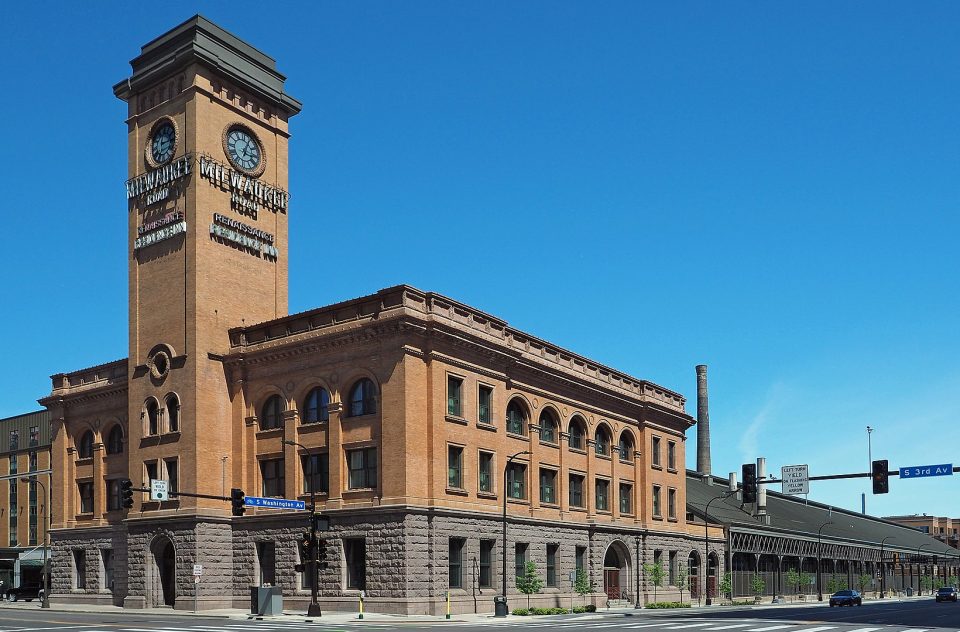 While the days of major railroad activity in Minneapolis have long passed, there remains one significant reminder of that by-gone era within the city’s urban core: the former Chicago, Milwaukee, St. Paul and Pacific Railroad Company complex, now home to a mixed-use development called The Depot.

The complex, which was best known as the Milwaukee Road Depot, was technically built in two stages. Its oldest structure, the Italianate-style freight house along 2nd Street, was built in 1879 as part of the original rail station complex – one of two freight houses at the original complex. But when that original station quickly became outdated, the station building was demolished to make room for a new passenger station and train shed – but both freight houses were retained, though one was later demolished.

The new station featured a Renaissance Revival design by noted railroad station architect Charles Sumner Frost. The structure varied in height from two to three stories, with a central clock tower that originally extended 140 feet in the air. Its façade consisted of yellow brick, pink granite, and terra cotta. Its marble-floored interior housed lounges, ticket offices, a restaurant, and a travelers’ pulpit. Behind the new station, a metal-roof train shed extended to 5th Avenue.

The station operated for just over seven decades, serving hundreds of trains each week. In the early 1940s, a storm destroyed the top of the building’s clock tower, reducing its peak and giving it the flat roof that it has today.

The station ultimately ceased operations in 1971, a victim of decreased traffic both locally and throughout the country. The complex was added to the National Register of Historic Places in 1978, but it sat vacant waiting for a new purpose for several years.

To help preserve the property and market it for redevelopment, the Minneapolis Community Development Agency acquired it in 1993. Initial plans for a café and office building at the property fell through, but in 1998, CSM Corporation initiated redevelopment efforts that would turn the complex into a mixed-use center featuring two hotels, an indoor water park, an ice-skating rink, and an underground parking structure. ESG Architecture & Design, which also worked on the Foshay Tower redevelopment project, collaborated with engineering firm Meyer Borgman Johnson on the project.

The $55 million project received over $16 million in public funding through grants and tax credits. The entirety of the historic passenger station was preserved, along with its attached train shed. Most of the one remaining freight house was torn down, but a small two-story portion that once housed offices was retained. In place of the rest of the old freight house, two new hotel wings were constructed.

By the summer of 2001, the revamped complex made its public debut. The old station became home to grand event space, as well as conference rooms and even a few suites for its adjoining duo of hotels. Its train shed housed the new public ice-skating rink; the remaining portion of the old freight house became a coffee shop. And two new hotels – a 130-suite Residence Inn by Marriott and a 227-room Courtyard by Marriott – debuted, with the latter also housing the complex’s new indoor water park. Stone Arch Bar, Charley’s Restaurant, and an interpretative history center rounded out the development’s initial tenants.

The completed project received a 2002 Preservation Award for Adaptive Reuse from Minneapolis Heritage Preservation Commission and the local AIA chapter.

The development, regrettably, has since undergone alterations to reduce its public accessibility. The water park was removed in the mid-2010s from the Courtyard, which rebranded as a Renaissance by Marriott hotel in 2007; the water park removal project also added 110 more guest rooms to the hotel. And a recent expansion of the station’s event space removed the ice-skating rink from the historic train shed, converting it to flex event space.

Today, both hotels continue to operate. The bar and restaurant have since rebranded as Milwaukee Road Restaurant & Bar, honoring the complex’s original namesake.

And while the complex isn’t as public-use-friendly as it was originally, its station building remains one of the city’s most popular event venues – and more importantly, its presence maintains a key piece of local history.