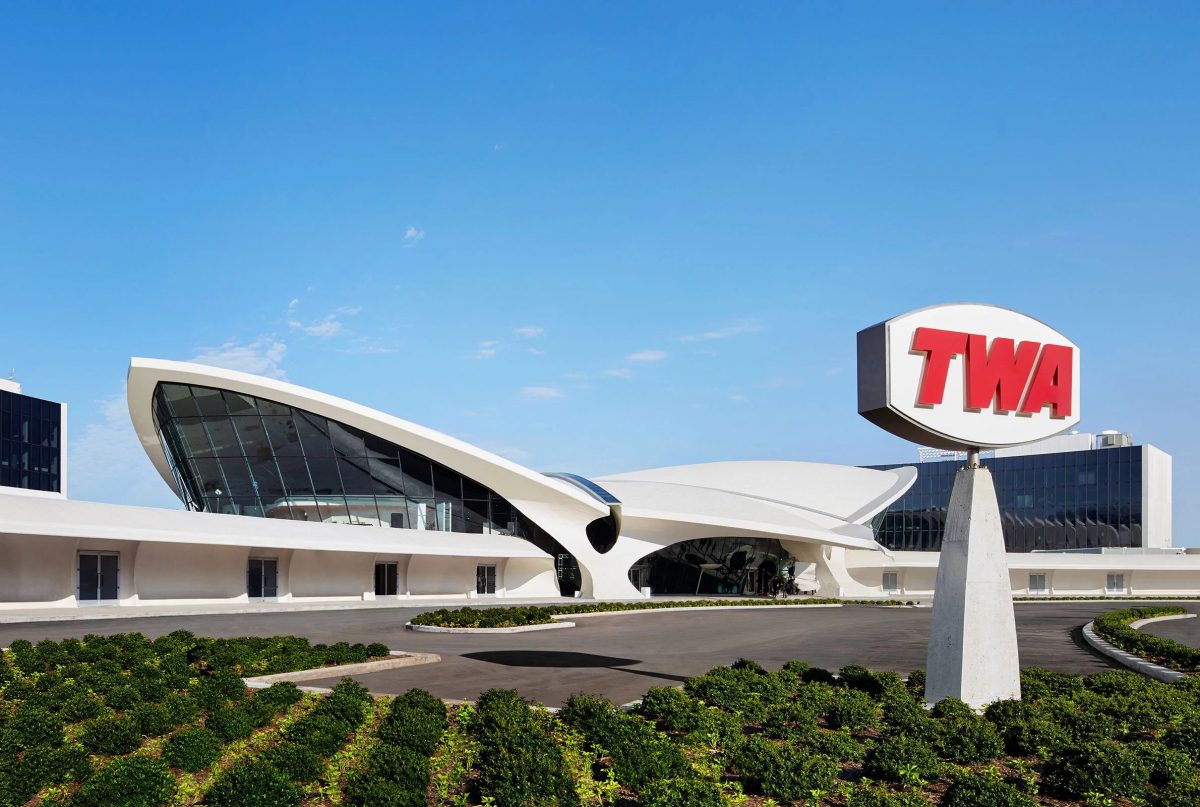 Guests who stay at the TWA Hotel in Queens, New York, are treated to quite a blast from the past.

The 512-room hotel, located at JFK International Airport, was built around the existing TWA Flight Center which once served as the airport terminal for Trans World Airlines and had sat dormant since TWA went out of business in late 2001.

The terminal building’s distinctive midcentury-modern design was the work of Eero Saarinen, also well known for designing the Gateway Arch in St. Louis. Saarinen, unfortunately, was never able to admire his work in its final form, as he passed away the year before the project’s 1962 dedication ceremony.

The original structure was expanded in 1969 to accommodate increased traffic and newer aircraft.

In the mid-‘90s, the terminal building was listed as a local landmark – although by that point, the writing was on the wall as far as TWA’s future. The company was in decline and would ultimately be sold to American Airlines in 2001.

The TWA terminal at JFK Airport was shuttered and, save for sporadic special events, sat unused for several years while the Port Authority of New York and New Jersey decided what to do with it.

In the meantime, JetBlue Airways began work on a new terminal building right next to the TWA building, which was granted national landmark status in 2005. A portion of the structure that had been added in the late ‘60s was demolished for the new terminal, which opened in 2008.

Finally, in 2016, a partnership between JetBlue and hotel management company MCR/MORSE Development led to the start of what would be a three-year, $265 million construction and adaptive redevelopment project.

MCR/MORSE built two new six-story structures surrounding the TWA building, as well as a 50,000-square-foot underground event and conference center. 74,000 cubic feet of sand displaced by the event center’s construction was donated to reduce flooding at nearby Spring Creek Park.

The central TWA building would essentially become a decadent lobby for the new hotel, to be adorned with an endless barrage of references to ‘60s architecture and TWA’s heyday. Out in front, an intricately-restored TWA plane was converted into a small cocktail lounge in partnership with Atlantic Models and Gogo Aviation.

The TWA Hotel, as it was dubbed, opened in May 2019. Its historic lobby features museum exhibits dedicated to both the building’s architecture and TWA’s history and culture. A central sunken bar and lounge, appropriately named The Sunken Lounge, offers a throwback to the quirky sunken living rooms of the era. Paris Café and Lisbon Lounge, the hotel’s premier eatery, features a menu presented by chef Jean-Georges Vongerichten and is named for two of the original tenants within the TWA terminal.

The building’s redevelopment has already received multiple architecture and adaptive reuse awards and is nominated for several more. Most remarkably, despite being a public-private partnership, the project was entirely privately-funded.

You can learn more about the TWA Hotel at twahotel.com.