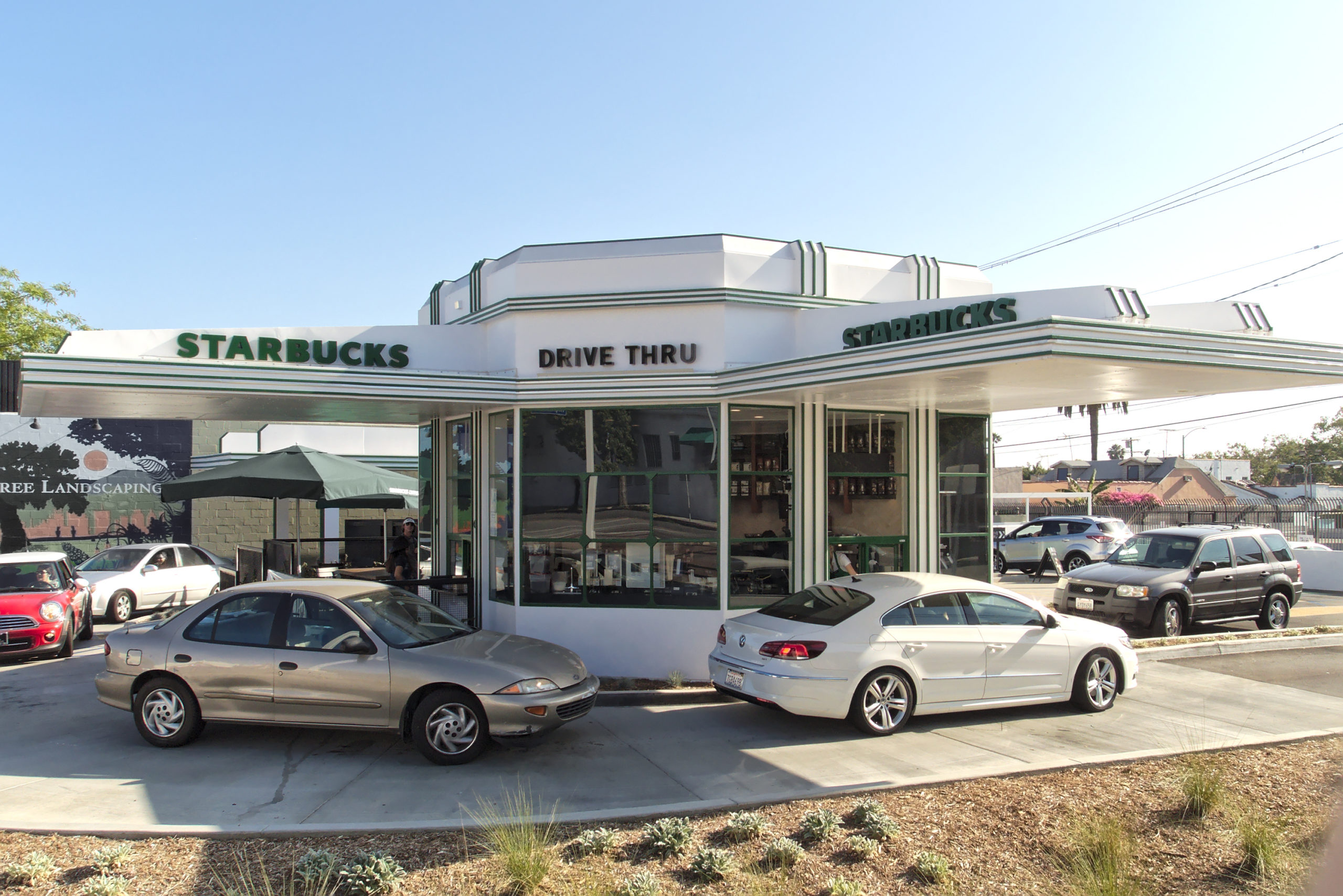 The former gas station at the corner of Highland and Willoughby in Hollywood has a small footprint but a rich history.

It’s been seen in movies like “48 Hours” and “L.A. Story,” photographs, and more, but for many years it sat vacant and crumbling – until coffee retailer Starbucks took over the space and reimagined it.

The building was originally constructed in 1935 as a Red Lion, a chain of gas stations owned by Gilmore Oil Company. Its Art Deco-inspired design featuring cantilevered metal canopies was helmed by engineer R.J. Kadow. It was built on land owned by actor Wallace Beery.

Gilmore Oil Company was ubiquitous in California, but in 1945 the company was acquired by Mobil’s parent company; the station then switched to Mobil branding.

In the mid-‘50s, Beery’s estate opted to sell off the gas station property. It was purchased and converted to a Texaco station.

Because of its location in Hollywood near several studios, and its distinctive retro architecture, the station became a popular filming location for movies and other projects. When the Texaco station stopped operating in the late ‘80s, it continued to be utilized for staging purposes for a few more years.

Unfortunately, without regular usage and maintenance, the building entered a decline. Neighborhood advocates were successful in having the property listed as a local Historic Cultural Monument site, but the station continued its deterioration – hastened by a car accident that caused structural damage.

In the early 2010s, after sitting vacant for almost two decades, Starbucks identified the site as a potential location for one of its coffee shops. The company acquired the property and enlisted a team led by architecture firm Valerio, Inc., to restore the dilapidated structure and reimagine it as a Starbucks location.

The station’s cantilever canopies were repaired, and its original roof restored, with the help of historic preservation contracting firm Spectra Company.

The project was completed – and the new Starbucks opened – in 2015. The location features a drive-thru window, a “walk-up” window, and outdoor seating underneath its canopies.

The new Starbucks has been recognized with a Preservation Design Award from California Preservation Foundation and a Los Angeles Conservancy Preservation Award, both in 2018. And thanks to the international coffee conglomerate, this iconic L.A. fuel station lives on to serve a new “fuel”: caffeine.