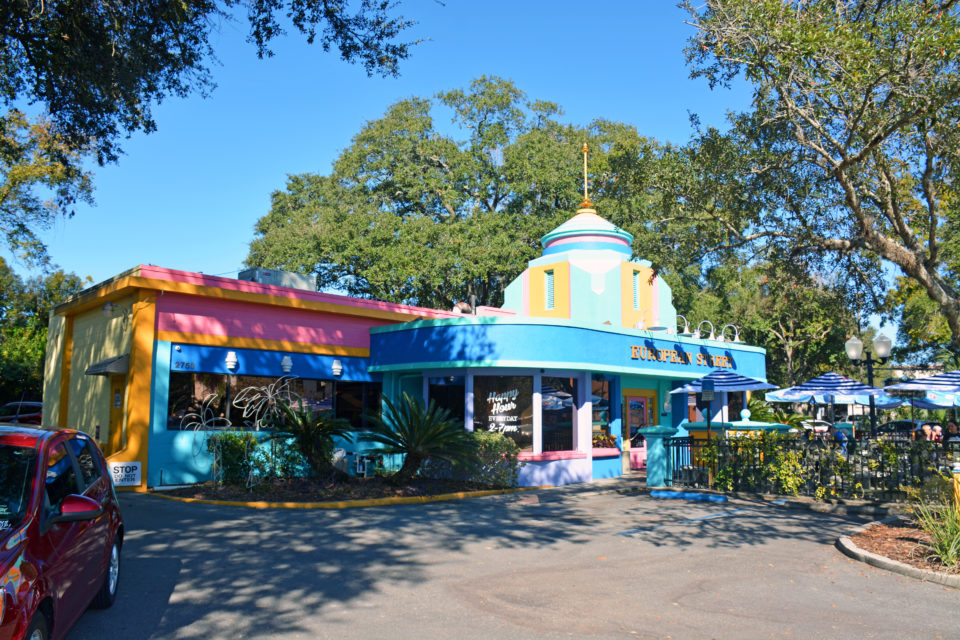 The funky-colored building at 2753 Park Street in Jacksonville’s Avondale neighborhood has been home to local favorite European Street Café for nearly thirty years – but the building itself has been around for much longer.

It was originally built in 1941 as a service station for Orange State Oil Company. According to Jacksonville historian Wayne Wood, the building was designed by Miami architect Michael Vaviloff; it features elements of both Art Deco and Streamline Moderne style.

Orange State was one of several oil companies whose service stations could be found in Jacksonville and its suburbs during the first half of the twentieth century, prior to the mass consolidation of those companies. Though not quite as mighty as leaders like Standard Oil, Orange State had locations throughout the state of Florida.

Orange State merged with Cities Service Oil Company, an early iteration of what is now Citgo, in 1961. The service station on Park Street closed shortly thereafter.

In the early 1970s, Florida Barber College relocated from downtown Jax to utilize the former service station as its new home. The school, which was also open to customers as a barbershop, stayed in this location until the early ‘80s, at which point the building became vacant.

In 1992, the boarded-up building was renovated – and given a new paint job – to become a second location for European Street Restaurant and Gourmet, a new restaurant concept from the owners of the popular Mr. Dunderbak’s at Regency Square Mall. Two years earlier, they had dropped the Mr. Dunderbak’s branding and reopened as European Street within Regency.

By August of 1992, the new restaurant had opened its doors. And, while the Regency location would close in 1999, European Street Café – as it’s now known – has become one of Jax’s most popular local eateries, expanding to four locations.

Today, European Street continues to operate its Avondale restaurant, which is now its oldest active location. And, for those who know its history, it serves as a reminder of the early service stations of Jacksonville.

Portions of this article were originally published by our sister magazine, The Coastal.