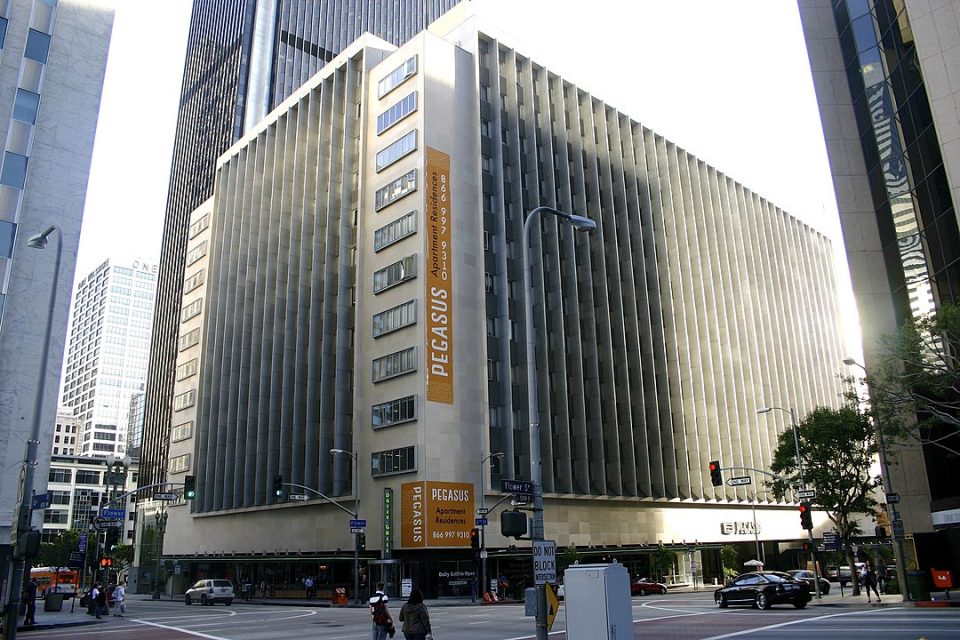 Located in the heart of Los Angeles’ central business district, the Pegasus apartment building at 612 S. Flower Street is one of downtown L.A.’s best examples of well-preserved Modernist architecture.

The 13-story building was constructed between 1947 and 1949 as the General Petroleum Company’s headquarters. Tragically, a worker named Laurence Leslie died in a fall during construction.

General Petroleum was a subsidiary of oil conglomerate Mobil; upon the building’s completion, a Mobil Oil sign along with the company’s red Pegasus mascot was affixed to its rooftop.

Designed by Wurdeman and Becket, the building featured elements of Modern and Corporate International styles. Its exterior was adorned with neutral-colored terra cotta tiles, along with green accent tiles, with black granite covering its recessed ground floor. Two open light courts began on the third floor within the building.

General Petroleum was its main tenant, but the 500,000-square-foot building – valued at $11 million at the time – was owned by New York Life Insurance. The ground floor featured retail units and two banking lobbies.

General Petroleum occupied the building until the ‘70s, at which point its space was leased to various other tenants. In the same decade, the building’s interior was remodeled significantly; among other changes, a parking garage was added to its basement.

Those renovations weren’t enough to keep up with newer office buildings in L.A., and by the ‘90s, the building was mostly vacant.

In 2001, the property was acquired by a development team consisting of The Kor Group and Kennedy Wilson. The two then collaborated on a $30 million adaptive reuse project that would convert the office building into an apartment complex in the heart of downtown L.A.

That project saw former office space reimagined by architecture firm KFA Architecture into 322 one- and two-bedroom apartment units, with its rooftop space reinforced and turned into recreational space including an exercise room and lap pool. The building’s parking garage was expanded to its first and second floors. Former ground floor retail units became home to a restaurant and café.

Historic Resources Group served as the project’s preservation consultants, as it did with the redevelopment of the nearby Eastern Columbia building.

The Pegasus, as the new complex was named, debuted in 2003. The next year, the building was added to the National Register of Historic Places. The project won a preservation award that year from the L.A. Conservancy as well.

The Pegasus was purchased in 2011 for $100 million by a Chicago-based real estate investment trust, providing a nice return for the project’s development team.

Today, the Pegasus still operates as one of L.A.’s most in-demand apartment complexes.