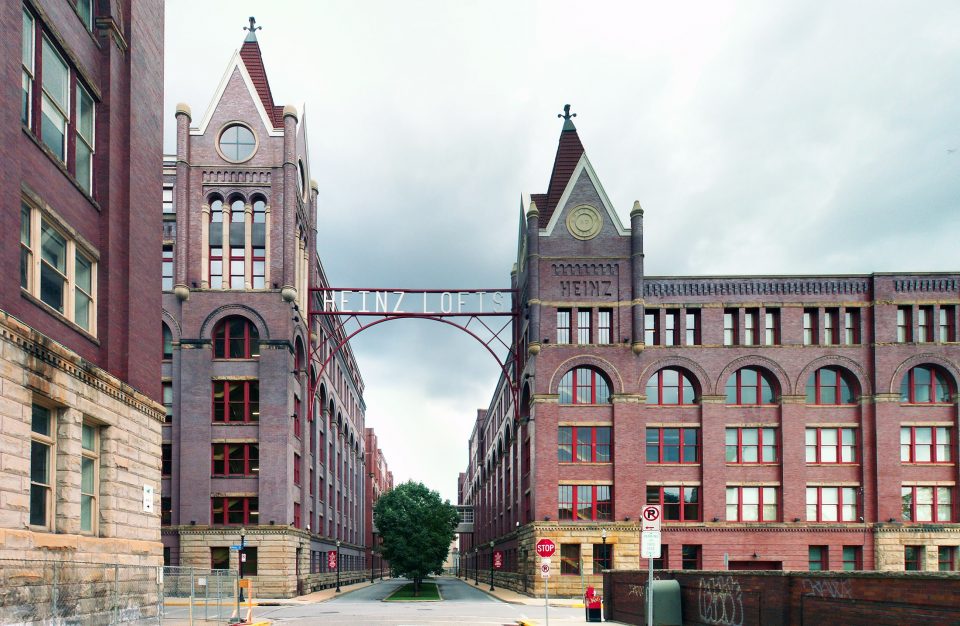 If you’ve shopped in a grocery store recently, you’re likely familiar with the Heinz name. But did you know that its early-1900s factory buildings, which helped them become a household name by producing hundreds of Heinz-branded grocery products, are now home to hundreds of loft-style apartment units along the Allegheny River in Pittsburgh?

The H.J. Heinz Company, originally founded in nearby Sharpsburg, PA, moved to the North Shore neighborhood of Pittsburgh in the late 1890s. The company began expanding rapidly enough that its first round of Pittsburgh facilities proved inadequate, prompting the commission of several new, larger buildings over the course of around two decades beginning in 1907. Five of those buildings make up the complex that now houses Heinz Lofts.

The first of those five to be built was the Bean building which, as its name suggests, housed the Heinz bean processing factory. Designed by the Heinz engineering team, it was built in 1913 as the second component of the Heinz campus.

The five-story Shipping building, also designed by Heinz engineers, followed in 1915 with a pedestrian bridge connecting it to the Bean building.

The Meat building, used for processing meat products, was completed in the early 1920s. Designed by architect R.M. Trimble, the seven-story Romanesque Revival-style building featured a nine-story tower with “HEINZ” lettering at the top. A bridge was added to connect it to the existing Shipping and Bean buildings.

The final two buildings, the Reservoir and Cereal buildings, were completed in 1926. The Reservoir building, designed by the Heinz engineering team, was designed to complement the existing buildings in the complex. It served as a water and electrical facility for the complex. The five-story Cereal building, designed by architect Albert Kahn, processed Heinz-branded cereal products and, like the Meat building, featured an engraving of the Heinz name. Like the earlier buildings, it exhibited Romanesque Revival styling.

The Heinz campus was modified during the ‘50s, with some smaller facilities removed and either rebuilt in modern styling or converted to parking space. Those five key buildings, however, remained mostly unmodified.

Heinz operated within this campus until the 1990s when the company built a new warehouse and headquarters building elsewhere in the city. The complex sat vacant for just a few years before The Ferchill Group purchased the Beans, Shipping, Meat, Cereal, and Reservoir buildings with plans to redevelop them into a loft-style apartment complex.

The group retained Sandvick Architects to aid in the redevelopment process as well as the preservation and restoration of the buildings’ original features. In total, the project would cost over $70 million, with funding from a $35 million investment by AFL-CIO Housing Investment Trust as well as over $10 million in historic tax credits.

Heinz Lofts opened in 2005, featuring over 260 one-, two-, and three-bedroom apartment units along with hundreds of covered parking spaces. The Cereal building was converted into an amenities center for residents. Heinz memorabilia was added throughout the complex to allude to its past use.

The adjacent former Service building, designed by Kahn, has since been purchased by a group that included Ferchill in 2015 and redeveloped into a complementary loft project, Heinz at 950.

Heinz Lofts was acquired by Philadelphia-based Alterra Property Group in 2017. Today, it continues to operate as both a busy apartment complex and a reminder of Pittsburgh’s industrial history.