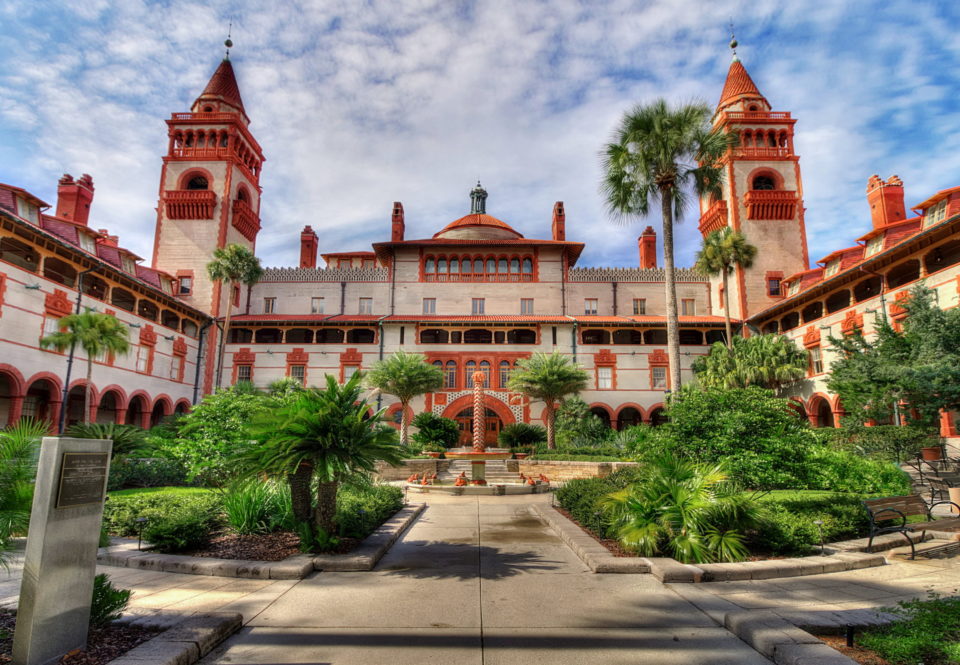 Visitors to St. Augustine, FL, might see Flagler College’s campus and wonder how a small liberal arts college wound up with such a grand centerpiece complex. The answer: adaptive reuse, of course.

The college’s main building at 74 King Street dates back to the 19th century, when railroad and oil tycoon Henry Flagler commissioned the design and construction of an upscale resort hotel in St. Augustine to serve travelers along the path of the Jacksonville-to-Miami railway created by his company, Florida East Coast Railway. Flagler invested heavily in several Florida towns including St. Augustine, where he also built other structures including another hotel, a railroad station, and multiple churches.

Flagler enlisted the architecture firm Carrere & Hastings to design a hotel worthy of its historic surroundings. The firm designed a five-story, U-shaped central block with four-story wings in Spanish Renaissance Revival style, with elements of Beaux-Arts influence. Additional structures rounding out the 7.5-acre project included a two-story building known as the Artists’ Studios, a central entrance pavilion, and an adjacent boiler room and chimney.

The building’s electrical setup was designed by Thomas Edison, who was friends with Flagler. Louis Comfort Tiffany served as a design consultant on the project, adding elements including stained-glass windows in the hotel’s dining hall.

Construction was led by James A. McGuire and Joseph A. McDonald and lasted from 1885 to 1887. According to historic documents, the hotel was the first building of its size to be built with concrete. A small creek was filled with sand to accommodate the project.

Hotel Ponce de Leon, as it was named, was a major hit initially. It was frequented by affluent guests including several U.S. presidents. In addition to over 500 guest rooms, it featured a large parlor and dining room, a children’s playroom, a gymnasium, a large garden, a bar, a smoking room, a barbershop, and other smaller-scale amenities. Many of these tenants were located within the hotel’s east hall, which now houses administrative offices for the college.

Business began to slow down around the time of World War I. Still, the Ponce de Leon was able to survive both the war and the Great Depression despite both causing several other similar hotels across the state to close – including some owned by Flagler.

During World War II, the hotel was taken over by the U.S. Coast Guard to be used for basic training. Following the war, it reverted back to the Flagler family.

A swimming pool was added on the property in the 1950s, a decade during which the hotel experienced a brief renaissance. Unfortunately, the hotel closed permanently in 1967 when its operator, also a member of the Flagler family, passed away.

Luckily, it took almost no time for the hotel to find new life – and it even involved keeping the property within the Flagler family.

Flagler College began operations that year within the former hotel, moving in without making any significant design changes initially. But by 1975, piecemeal renovation efforts began to restore and revitalize its historic property.

Former guest rooms were renovated into dorm rooms for students; air-conditioning was later added to the rooms as well. A service building for the hotel became classroom space. The former Artists’ Studios building became home to the college’s maintenance department. A statue of Henry Flagler was added at the building’s King Street entrance, as well as two brick-and-concrete Flagler College signs on opposite ends of the property. Another memorial was added later to honor Lewis.

The stained-glass windows added by Tiffany were restored by Baton Rouge-based Tipton Associates.

In total, renovation efforts would span multiple decades, with the college spending more than $25 million to renovate the historic building while preserving its key elements.

Today, Flagler College has extended its campus into surrounding blocks, but the former Ponce de Leon Hotel remains as its historic centerpiece.