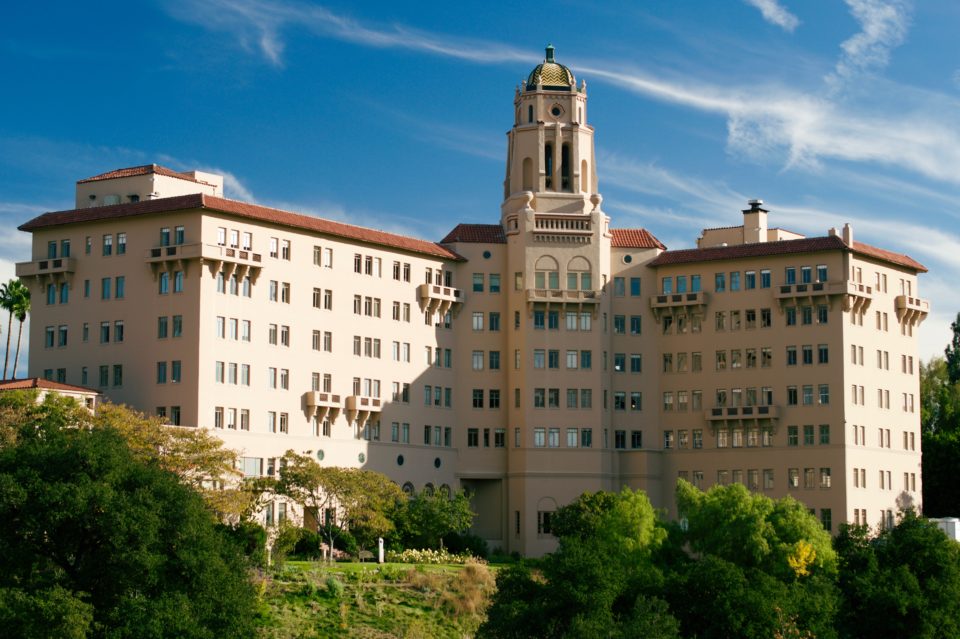 The grand Richard H. Chambers Courthouse sits atop a hill overlooking the Arroyo Seco in Pasadena, CA. It’s one of the city’s most prominent visual landmarks, and since 1985, it’s served as the southern seat of the Ninth Circuit Court of Appeals – but that’s just a fragment of the historic building’s timeline.

The hilltop on which the building sits was originally home to a two-story boarding house and several surrounding bungalows, built after the turn of the 20th century. The boarding house was founded by Emma C. Bangs; when she passed away, it was acquired by a new owner who operated the property as Vista del Arroyo, a small resort.

In 1920, the property was purchased by noted hotelier Daniel M. Linnard, who quickly retained architecture firm Marston & Van Pelt to design a two-story, Spanish Colonial Revival-style addition to the north end of the existing boarding house. The expansion came amidst the tail end of a resort hotel boom in Pasadena.

Linnard sold the property to H.O. Comstock in the mid-‘20s; Comstock then began plans for an even larger expansion. He hired architect George H. Wiemeyer to redesign and expand the existing Vista del Arroyo hotel. In 1931, the hotel reopened and debuted a new six-story expansion, complete with 400 new rooms and a belvedere tower. Like the Marston & Van Pelt expansion years earlier, it featured strong Spanish Colonial Revival style elements.

Linnard was apparently impressed by the new, larger Vista del Arroyo, as he had reacquired the property by the mid-‘30s. He brought in landscape architect Verner S. Anderson to design the hotel gardens, which would feature fountains, tennis courts, and a pool.

While the Comstock and Linnard upgrades helped the resort hotel outlast many of its competitors, it was still on its last legs by the start of the ‘40s. Luckily, the building would soon find a new – albeit grim – use.

The government took over the building in 1943, acquiring it under the World Powers Act. It was converted into McCornack Army Hospital to serve as an auxiliary medical center for injured soldiers during World War II. The hospital operated until 1949; after that, it was utilized as office space for the U.S. Army and Navy.

The U.S. General Services Administration acquired the old hotel property in 1964. It continued to be used as office space – for federal agencies rather than the military – until 1974.

The building and its surrounding bungalows were added to the National Register of Historic Places in 1981. Around the same time, the GSA began hatching plans to restore the building for use as a federal courthouse. Architecture firm Neptune & Thomas helmed the restoration and renovation efforts.

The new U.S. Court of Appeals building opened in 1985. Around a decade later, it was rededicated in honor of Richard H. Chambers, a Ninth Circuit judge who had strongly advocated for the building’s reuse as a courthouse.

Today, the Richard H. Chambers Courthouse continues to house the U.S. Court of Appeals for the Ninth Circuit.