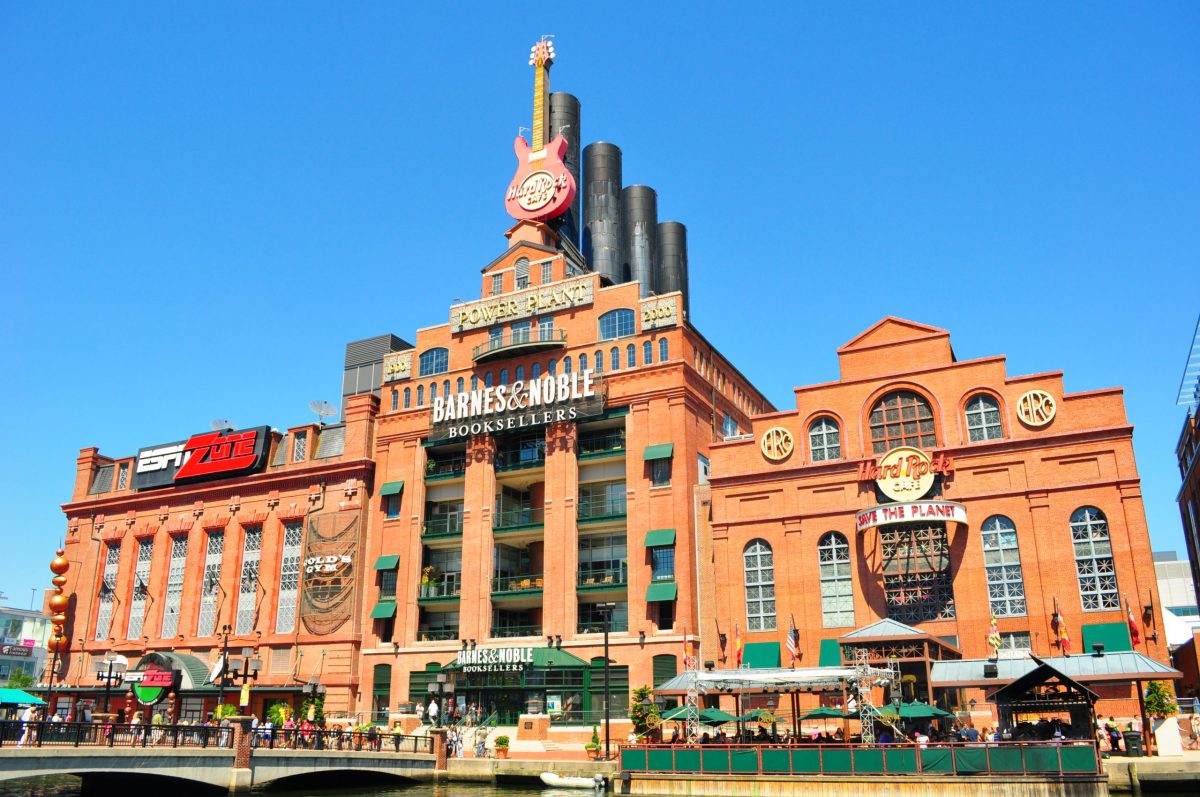 Though its usage has changed a few times over the years, the Pratt Street Power Plant complex has long served as a reminder of the industrial roots of Baltimore’s Inner Harbor.

The Power Plant, located at 601 E. Pratt Street, was originally built between 1900 and 1909 to serve as the main source of power for what would become the United Railways & Electric Company, a streetcar operation company. Built to replace a previous plant that was damaged in a fire, the new plant consisted of three grouped buildings: a central boiler house, topped by four distinctive smokestacks and flanked by two engine houses. It was designed as an industrial complex with Neo-Classical elements by a team led by architecture firms Baldwin & Pennington and Purdy & Henderson.

Parts of the new plant were still under construction when a significant fire hit downtown Baltimore in 1904, destroying well over 1,000 buildings. The plant, however, survived with minimal damages.

United Railways & Electric Co. sold the plant to Consolidated Gas, Electric Light and Power Company, a precursor to Baltimore Gas and Electric Company, in 1921. It served as a steam plant for the company until the early ‘70s, after which it fell vacant.

In 1979, the city of Baltimore acquired the property and, after demolishing a coal hoist on the west side of the main building, began offering it for development. A hotel was originally proposed, but the project was ultimately abandoned.

In the early ‘80s, Six Flags formed a plan to redevelop the three buildings into a new theme park. It took over the property, adding an entrance canopy and ticket booth but otherwise largely preserving the original structure.

Six Flags Power Plant opened in 1985, themed around fictional inventor Phinias T. Flagg and utilizing the industrialized interior of the buildings as a showcase for Flagg’s “inventions.” The park also included an exhibit honoring the building’s real history.

Unfortunately, the Six Flags concept didn’t prove to be much of a hit. It lasted only four years before shutting down, leaving the complex vacant again.

In the early ‘90s, the Power Plant was acquired by The Cordish Companies, which then embarked on a $40 million adaptive reuse project to create retail, restaurant, and office space. The company signed on Barnes & Noble, ESPN Zone, and Hard Rock Café as its anchor tenants, all of which opened their doors by the end of 1998. Barnes & Noble occupied two floors within the main building, while the two restaurants anchored each of the engine house buildings.

The plant’s ESPN Zone was the first to open in the country, though it would close in 2010.

Other tenants included nightclubs and a gym. The Cordish Companies and Design Collective both utilized – and continue to utilize – the plant’s new office space for their headquarters.

In 2011, Philips Seafood took over the former ESPN Zone space.

Today, the Pratt Street Power Plant is part of a thriving tourism and entertainment district in Balitmore’s Inner Harbor and stands as a premier example of reutilizing industrial properties.