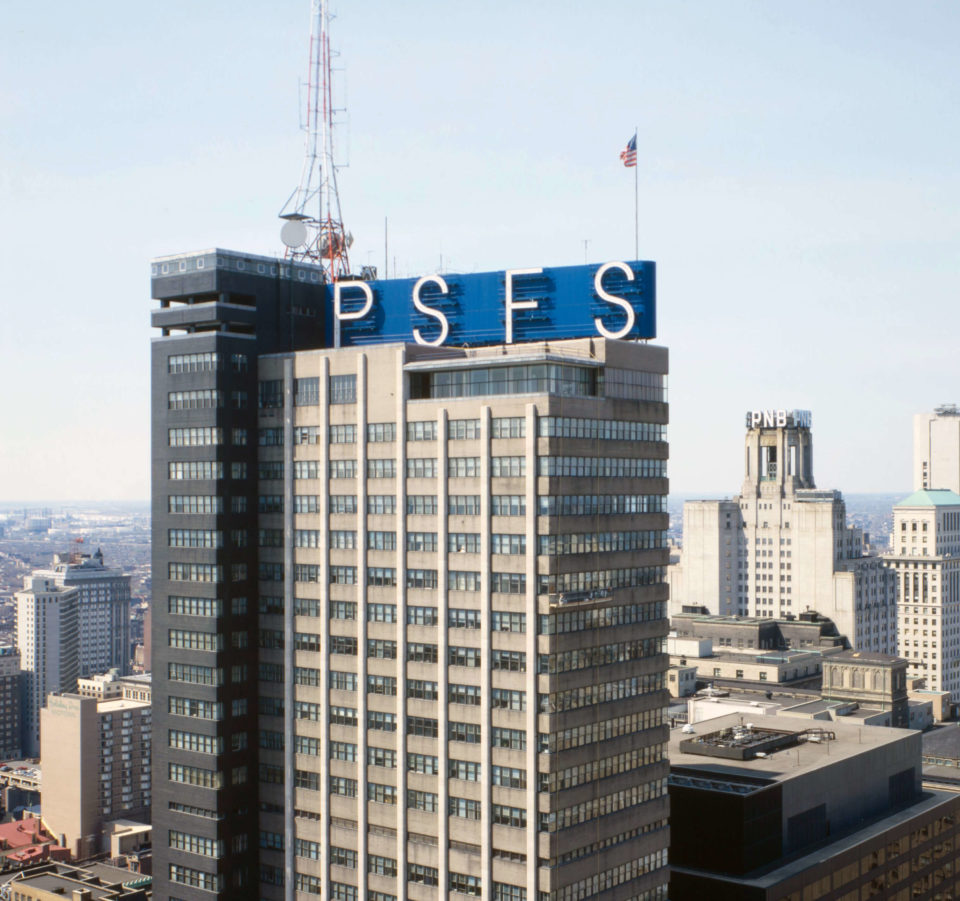 All photos via Library of Congress public records

For decades, the iconic “PSFS” sign has shined in the Philadelphia night sky from atop the PSFS Building at 12th and Market.

PSFS stood for Philadelphia Savings Fund Society, the saving bank company for whom the building was commissioned. The bank, founded in the early 1800s, had outgrown its existing headquarters building on Walnut Street, prompting its president, James M. Willcox, to pursue the development of a new building.

What the three men settled on was a 491-foot tall skyscraper that would serve as one of the earliest examples of International style architecture in America. The new PSFS building opened in 1932, becoming Philadelphia’s tallest office building and among the first of its size to be fully air-conditioned. Among its most iconic features were its 33rd-floor boardroom and solarium, offering miles-long views of Philadelphia, as well as its bright PSFS sign that could itself be seen from miles away.

PSFS only needed about a third of the building’s office space; the rest was leased out to other tenants, including ground-floor shops, to help cover the $8 million construction price tag.

The building remained in use by PSFS for nearly 60 years; the bank still occupied the building when it was added to the National Register of Historic Places in 1976. In 1990, the bank’s branding was bought out, resulting in the PSFS sign briefly going dark. And while the sign would soon be illuminated once again, the building itself was mostly vacant by the early ‘90s.

In 1993, however, the opening of the nearby Pennsylvania Convention Center offered new hope for the PSFS building and its surrounding area. The property was acquired by developer Carl Dranoff, who would collaborate with Ronald Rubin of the Rubin Organization to market the building for redevelopment.

Rubin and hotelier Jonathan Tisch announced in 1997 that Loews Hotel would open one of its hotels within the historic building. Loews acquired Rubin’s share of the property shortly thereafter.

Bower Lewis Thrower Architects then collaborated with Robert Powers of Powers & Company to adapt the building into a modern hotel while preserving and even reutilizing its historic elements. Daroff Design provided interior design services for the project as well.

The $115 million renovation project wrapped in 2000, with the new Loews Hotel opening in time to house the Florida delegation for the 2000 National Republican Party Convention, which was hosted in Philly.

The new hotel featured over 580 guest rooms as well as a ground floor restaurant and bar, Bank & Bourbon. The former PSFS boardroom was adapted into meeting space, while the 2nd-floor banking room is used as a ballroom.

Today the Loews Philadelphia Hotel continues to operate within the old PSFS building. And the iconic PSFS sign continues to light up the night sky.