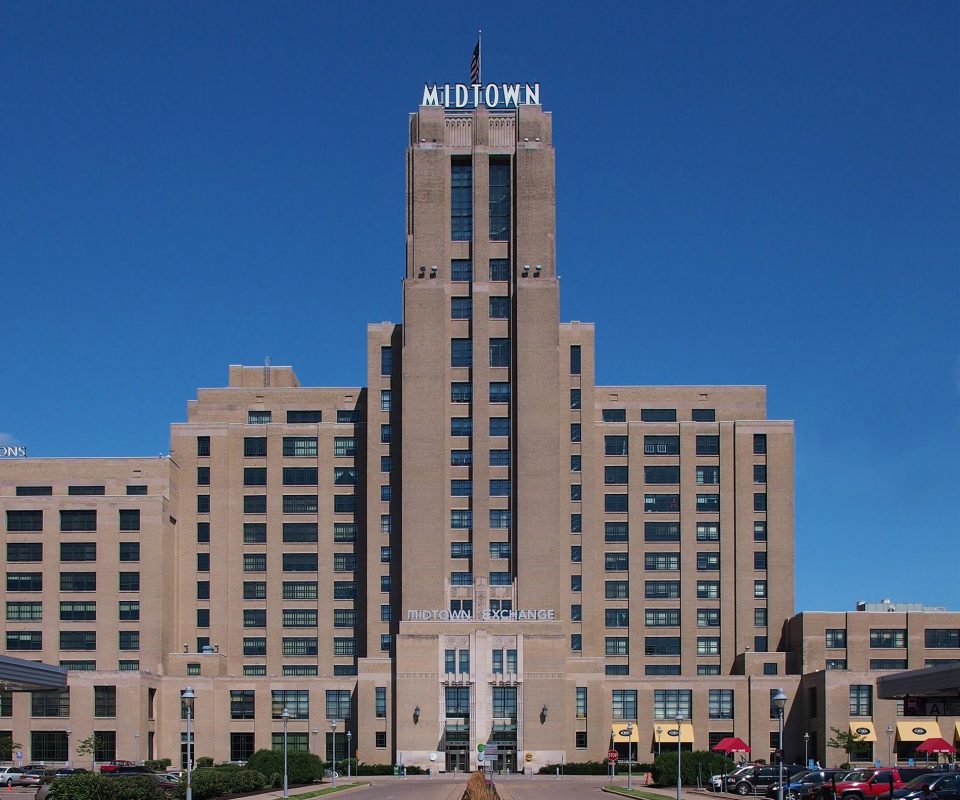 There’s something about old Sears buildings that makes them perfect for large-scale adaptive reuse projects. From Atlanta to Seattle, old Sears, Roebuck, & Company warehouse and retail buildings have been put to various new uses.

In south Minneapolis, the old Sears building now lives on as the mixed-use complex Midtown Exchange.

The Sears, Roebuck, & Co. Mail-Order Warehouse and Retail Store building, located at 2929 Chicago Avenue S. in the city’s Midtown region, was constructed between 1927 and 1928 on property that sat next to railroad tracks – a must for a Sears building at the time – with the facility opening in March 1928. Its development came amidst a flurry of expansion for the retailer, which at the time was best known for its mail-order business. Several houses were either demolished or relocated to accommodate the project.

Designed by Sears-favored architecture firm George C. Nimmons & Co. of Chicago, the twelve-story warehouse building featured Moderne style elements, two shorter wings, and a 211-foot tower. It was intended to serve hundreds of thousands of customers annually in the Midwest; business proved to be so good in the region that one of its wings received a six-story addition just a year after opening, creating a nine-story wing.

As Sears grew to become the most dominant retailer in America, the building’s already-large parking lot was expanded several times to accommodate visitors to the retail store. Shifts in the way Americans shopped would gradually result in more traffic at the company’s department stores – but those same shifts would also put a dent in Sears’ mail-order business, which spelled doom for the retailer.

Nonetheless, Sears remained successful for several decades in Minneapolis. A warehouse addition in 1964 allowed the company to double its existing retail store; by then, it also had several smaller department stores throughout the metropolitan area.

The ‘90s would ultimately seal the fate of the Minneapolis Sears building. The mail-order warehouse shut down in 1990 as the company shifted away from its catalogue business. And in the early ‘90s, Sears signed on as an anchor tenant at Mall of America in nearby Bloomington, rendering the grand Midtown store largely obsolete.

Sears closed its doors for good in 1994.

The building and its property sat vacant for years before the city acquired it in 2001. It then sold the property – including the historic Sears building – to Allina Health Systems, the operator of a neighboring hospital.

Allina Health utilized a portion of the property to build a new 1,100-car garage, then brought in developer Ryan Companies to redevelop the historic, 1.2-million-square-foot complex.

Ryan Companies collaborated with Sherman Associates and Project for Pride in Living to create two different multifamily living options: 88 loft- and penthouse-style condominiums, dubbed the Chicago Lofts, and 219 apartment units. Office space was constructed to accommodate Allina Health, which would use the newly-redeveloped complex as its new headquarters. A brand-new Sheraton Hotel was added to the former parking lot.

And a collaboration between local nonprofits resulted in the creation of Midtown Global Market, a food market and small-business incubator within the complex.

In total, the project’s cost was estimated at over $157 million – with Ryan Companies receiving over $17 million in incentives to offset that cost. As part of development efforts, the building was added to the National Register of Historic Places in 2005.

Midtown Exchange, as the new mixed-use center was dubbed, reopened in 2006. The completed project received the 2006 National Trust/HUD Secretary’s Award for Excellence in Historic Preservation, as well as a 2007 National Merit Award for Best Renovation/Rehabilitation from Design-Build Institute of America.

Today, Midtown Exchange sits amidst a hub of activity that includes a hospital campus, a streetcar line, and an extensive greenway, providing life for an old Sears building that outlived its original use.