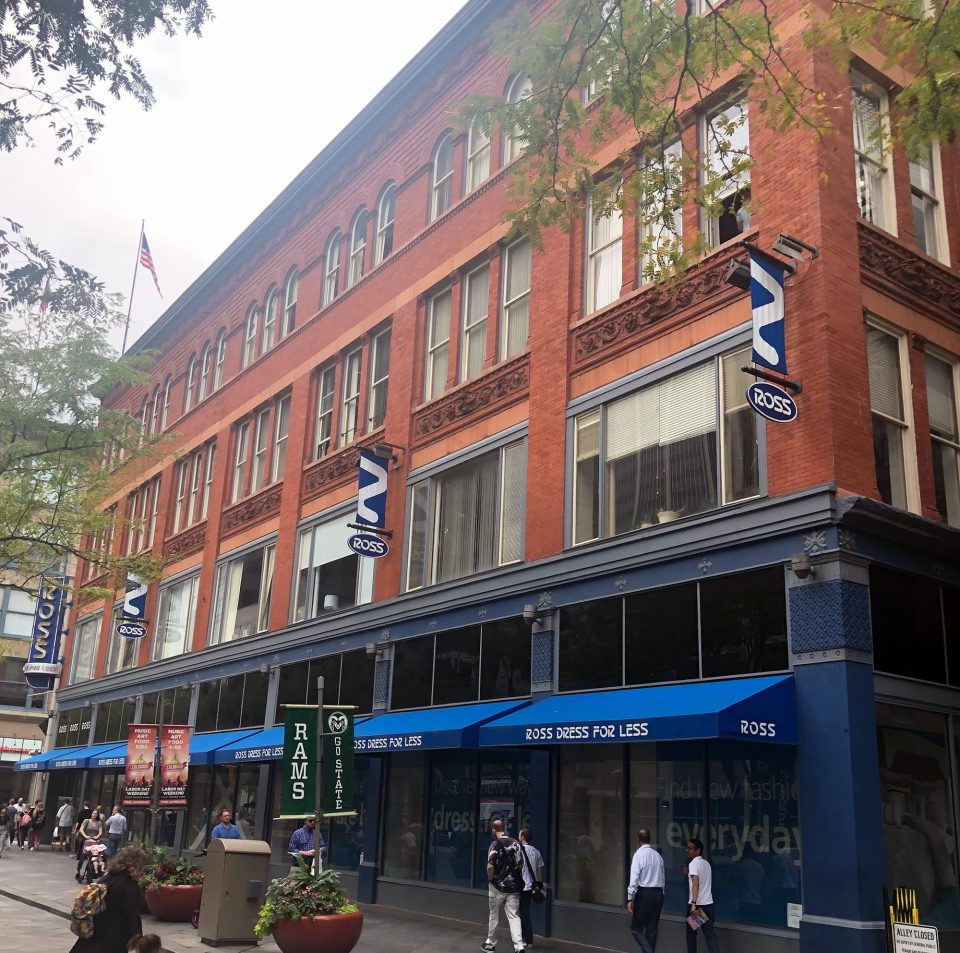 Downtown Denver’s bustling 16th Street Mall is an eclectic mix of historic and contemporary architecture – along with historic architecture being utilized by contemporary brands. The A.T. Lewis & Son Department Store building at 800 16th Street / 1543 Stout Street provides an excellent example of the latter, with its Renaissance Revival-style structure being anchored by modern shopping center mainstay ROSS Dress for Less.

Though the modern residential component is new, the building has actually housed department stores since it was first constructed. The four-story structure was built in 1891 as the home of Salomon’s Bazaar, an early precursor to the department stores that would soon line the streets of downtown Denver. Robert S. Roeschlaub, a local architect who designed dozens of buildings in Denver, handled its design.

Salomon’s Bazaar fizzled out after less than five years, but its new building didn’t stay empty for long. A.T. Lewis & Son Department Store moved in by 1896.

A.T. Lewis & Son grew rapidly alongside several other dominant department stores in downtown Denver, including the nearby Joslin Dry Goods Co. It expanded its existing building in 1902, with the addition being designed by Roeschlaub. It then added an annex building next door in 1917, designed by Frank E. Edbrooke who also designed Joslins and what’s now The Magnolia Hotel.

Despite its rapid growth, A.T. Lewis & Son was unable to survive the Great Depression. It closed down in 1932, but the building’s ground floor remained occupied by a series of retail shops.

In 1940, the building underwent major interior renovations, as well as a three-story addition to its western wall designed by Alfred S. Alschuler Company, to prepare for W.T. Grant and Company to take over as its anchor tenant. The annex building, meanwhile, became home to the Denver and Rio Grande Western Railroad’s local operations.

W.T. Grant and Company, a major national department store chain, lasted for three decades within the building before exiting in 1970 – just six years before the company closed all its locations. The departure of Grants left the building’s upper floors vacant; its ground-floor retail space remained active, though, hosting brands such as Wilsons Leather, Baker’s Shoes, and Lane Bryant.

At the time the building was added to the National Register of Historic Places in 1994, Wilsons, Baker’s Shoes, and Colorado Trading Post were its ground-floor tenants, but the rest of the building was vacant.

Around the same time the building was added to the NRHP, a project was initiated by the now-defunct development company BCORP-HRT LLC to redevelop the former A.T. Lewis & Son annex building – by then known as the Rio Grande building – into residential lofts and ground-floor retail units, utilizing funding from Denver Urban Renewal Authority.

In the midst of that project, BCORP-HRT opted to revamp its plan to include the A.T. Lewis & Son building, creating a 120-unit residential complex with ample retail space. The renovation efforts would involve restoring the original brick exterior of the A.T. Lewis building, which had been covered up during the 1940 renovations.

The Rio Grande Lofts were completed in 1996, followed by the A.T. Lewis Lofts in 1998. Upon its completion, the project received the 1998 HUD Secretary’s Award for Excellence in Historic Preservation.

The two buildings were acquired by San Francisco-based FPA Multifamily in 2018 for $32.5 million and are now managed by Trinity Property Consultants. The loft-style apartment complex, now branded as ReNew on Stout, continues to operate, as does the ground-floor ROSS.

As part of the busy 16th Street Mall, the A.T. Lewis & Son building now lives on to be admired by locals and tourists for years to come.