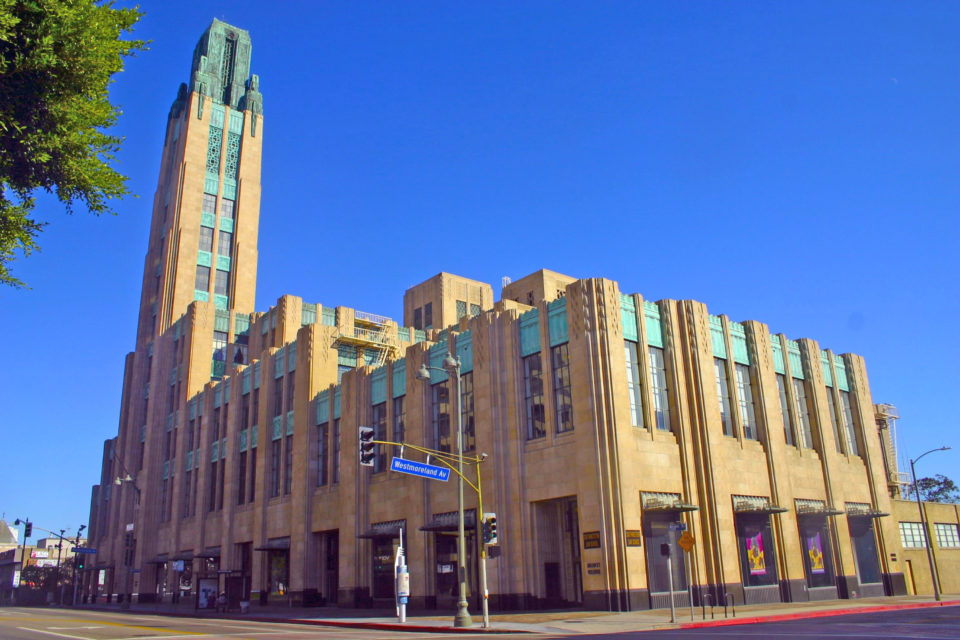 Now a large component of Southwestern Law School’s campus, the historic structure at 3050 Wilshire Boulevard in Los Angeles, CA, started out as one of the city’s most luxurious department stores.

The beautiful Art Deco building was constructed in 1929, its design helmed by L.A. father-and-son architect duo John and Donald Parkinson. Its grand terra cotta and green copper exterior was highlighted by a 241-foot central tower. The central portion of the structure, excluding the tower, was five stories tall and decreased in height as it expanded outward, its lowest point being two stories tall. The interior featured a central foyer with marble walls and was designed by Fell and Paradise in collaboration with Jack V. Peters.

The building was commissioned by John G. Bullock, who had previously constructed a department store named Bullock’s in downtown L.A. which was also designed by the Parkinsons. Bullock envisioned the new Wilshire store – one of the first department stores to be built outside of downtown – as a luxury shopping destination.

The lavishly-designed Bullocks Wilshire featured elaborate departments that looked more like mini-stores. The building was designed to accommodate vehicle traffic, a necessity given its distance from the central business district. Its main entrance faced the parking lot and featured a covered carport for drop-offs.

Bullocks Wilshire sold only the most upscale designer clothing; it hosted the West Coast debut of Givenchy and Phillippe Venet. Its fifth-floor tea room was a popular gathering spot for local elites.

When Bullock’s was acquired by Federated Department Stores in the ‘70s, Bullocks Wilshire was spun off as its own separate, luxury-themed brand and other locations began opening. The dilution of its luxury brand, as well as the rise of other suburban shopping options, pushed Bullocks Wilshire into a steady decline.

In 1978, the building was added to the National Register of Historic Places; it had been declared a local landmark eight years earlier.

Ultimately, the rebrand didn’t matter. The store was closed in 1993, along with a clump of other Macy’s-owned stores, as part of bankruptcy proceedings.

Luckily, though, the building didn’t sit vacant for long. In 1994, it was acquired by Southwestern Law School as an expansion of its existing campus. The school then embarked on a ten-year, $29 million project, aided by STIR Architecture and Ronald Altoon, to restore the building’s historic design details and convert it into classroom and library space.

The first phase of the project, the Leigh Taylor Law Library, opened in 1997, occupying around a third of the building’s 230,000 square feet of space.

The project was completed in 2004 with the opening of the Julian C. Dixon Courtroom and Advocacy Center.

The school’s restoration efforts have received several design and preservation awards, including the 2000 National Preservation Award from the National Trust for Historic Preservation and the 2005 Los Angeles Conservancy President’s Award.

Today, the old Bullocks Wilshire building continues to function as an important part of the Southwestern Law School campus.