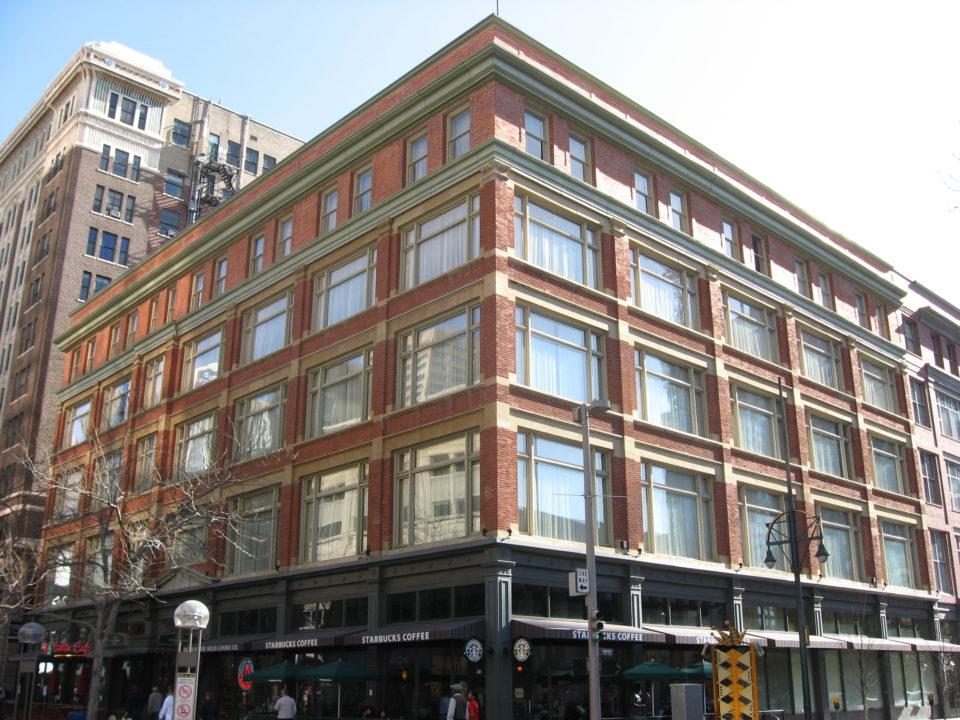 While nowadays there are plenty of companies that would love to own a well-preserved historic property, doing so wasn’t always something companies had in mind decades ago – especially if that property had been in their possession for many years.

That was the case with the Joslin Dry Goods Co. building at 16th and Curtis in downtown Denver, which was built in 1887 but underwent renovations in 1902, 1927, and 1964, with the last round rendering the building’s exterior unrecognizable in comparison to its original form.

As mentioned, the building’s history begins in 1887 when it was first constructed as a four-story brick commercial building. It was commissioned by George Tritch; the building was initially referred to as the Tritch Building. Its 19th-century commercial design was helmed by Frank E. Edbrooke, whose uncle designed what’s now the Magnolia hotel just a couple of blocks away.

Joslin Dry Goods Co. was one of a few tenants to set up shop on the ground floor of the new building, but it grew so rapidly that by 1902, the company bought up the rest of the building’s space to become its primary tenant. Modern elevators and large showroom-style windows were added in what would be the first of several rounds of renovations.

A second remodel project in 1927 gave the building its modern-day appearance, adding large Chicago-style windows on its upper floors as well as a fifth-floor attic for storage. Part of a cornice that originally topped the building remains along the top of the fourth floor.

Over the years, Joslin Dry Goods grew into a successful downtown department store, weathering the Great Depression and two major wars. However, business began to decline in the ‘50s, leading the company to hatch plans for another renovation project.

In 1964, a $2 million overhaul of the building included a five-story addition to its rear and also, somewhat bafflingly, involved covering up the historic brick exterior adorning its top four floors with a combination of stucco and concrete. The company rebranded as Joslins to coincide with the changes to its building – and to better reflect its status as a department store.

The remodel allowed Joslins to keep going for a while longer, but as downtown department stores gave way to suburban shopping malls, its clientele went back to shrinking rapidly. The brand shifted its focus toward suburban locations, and by 1995, it opted to close its downtown store permanently. Joslins as a whole would only last another three years before being absorbed by Dillard’s.

Luckily, the building didn’t sit vacant for long, with National Properties and Sage Hospitality partnering to acquire the property and convert it into a new hotel.

Fentress Bradburn Architects helmed the redesign, which attempted to restore as many of the building’s historic features as possible. The building’s composite covering, added by Joslins in ’64, was removed, and damages brought about by the ’64 renovations were repaired.

The building was added to the National Register of Historic Places, and shortly thereafter, the 177-room Courtyard by Marriott opened its doors within the historic structure. In addition to the hotel, the revamped building featured the 250-seat Rialto Café.

The hotel has since undergone two more renovations: one in 2011 to upgrade guest rooms, and another in 2017 to spruce up the lobby. And Sage Hospitality, which still manages the hotel, would later play a key role in the redevelopment of the city’s former Union Station building as well.

Today, the Courtyard by Marriott – and Rialto Café – continue to operate within the former Joslins building.

Richard H. Chambers Courthouse in Pasadena Was Once a Hotel, Offices, and Even a Hospital