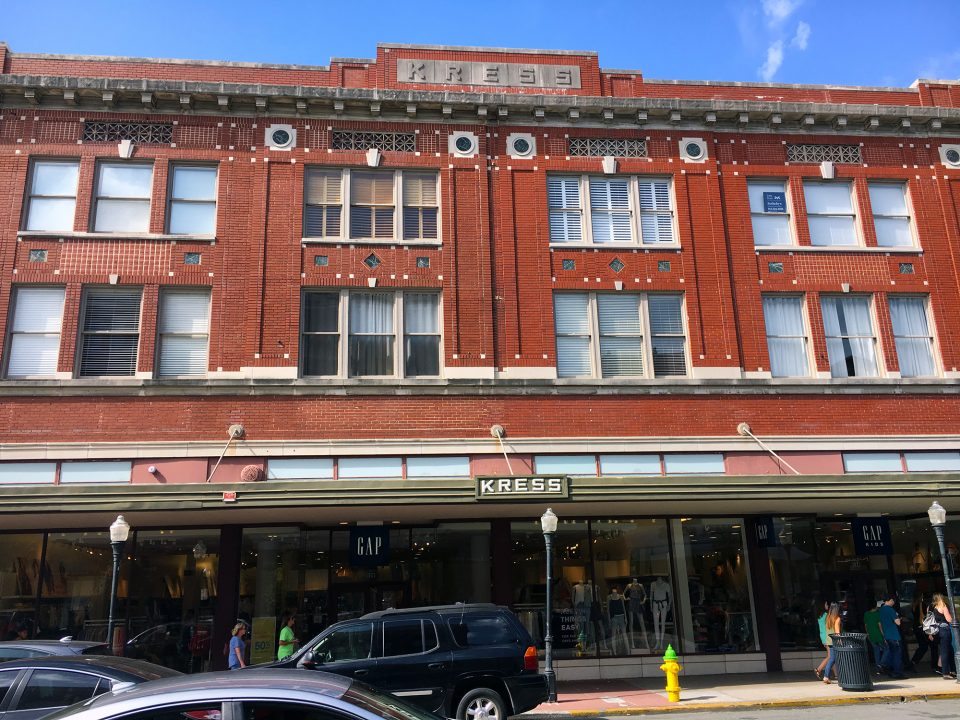 Savannah, GA, is home to one of the largest and most impressively preserved historic districts in the country. As a result, it’s also home to several great adaptive reuse projects – all of which we’ll cover here in due time – that utilize some of the city’s most iconic historic buildings for modern purposes.

One such project is the reuse of the historic Kress building at Broughton and Barnard streets. S.H. Kress & Co., a once-mighty chain of five-and-dime retail stores, opened within the building in 1923. Kress, founded in the late 1800s, was known for its buildings’ grand architecture. Its Art Deco-style building in Savannah was designed by E.J.T. Hoffman, one of several in-house architects for Kress during the ‘20s – which was its most prominent era of expansion. Its red-brick exterior was adorned with small marble ornamentation as well as a prominent case-stone “KRESS” spelled out near its roofline.

In 1938, an expansion to the building doubled its size along with adding metal awnings, adorned with the Kress name. The expansion was built so as to duplicate the original structure aesthetically.

The Kress store was a fixture for decades amongst the many shops that lined Bronough Street. But it ran into trouble both locally and nationally due to its segregated lunch counters, which became a focal point for civil rights protests during the early 1960s. Its Savannah store was one of several protested locally.

The incidents, along with S.H. Kress’s death in 1955, contributed to the brand’s downfall. The company was acquired by another retailer, Genesco, in the mid-‘60s and began shifting its focus toward suburban shopping malls. In 1981, the company was sold again, this time to rival five-and-dime purveyor McCrory Stores.

McCrory, which already operated its own downtown Savannah store, opted to keep the Kress location open under its direction. The McCrory chain thrived throughout the ‘80s, but the rise of suburban big-box stores quickly rendered it obsolete.

In 1997, McCrory closed hundreds of its stores, including Kress in Savannah. The company went out of business altogether five years later.

Luckily, the historic building didn’t sit empty for long. Local developer Michael Brown, who had been acquiring historic properties for redevelopment in Savannah throughout the ‘90s, acquired the building in 1998 through his Durbin Holdings company.

By the end of 2000, the Kress building project was complete, with national clothing retailer Gap becoming its ground-floor tenant. Bar and entertainment venue Jazz’d Tapas Bar opened within the building’s basement. And its upper floors became home to 20 loft-style condominium units.

The building hasn’t changed much since, with Gap and Jazz’d still occupying their respective spaces. But the surrounding Broughton Street area has experienced a major renaissance, prompted in part by similar adaptive reuse projects.

And while the brand is long gone, the building’s prominent Kress signage remains as a reminder of a previous era of retail.