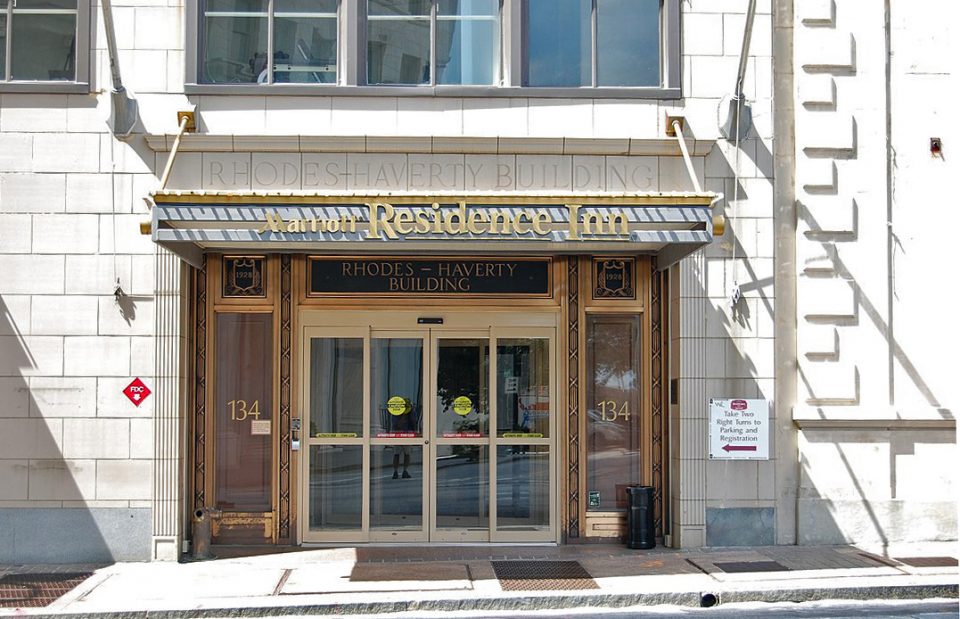 Though it has been known as the Downtown Atlanta Residence Inn for over two decades, the historic building at 134 Peachtree Street N.W. was originally constructed to house an ill-fated alliance of furniture magnates.

The Rhodes-Haverty building, as it was historically known, was constructed in 1929. Designed by Pringle and Smith, the Romanesque-style office tower – adorned with brick, granite, and a terra cotta trim – extended 21 stories into the sky. It became Atlanta’s tallest building upon completion, a title it held until the mid-‘50s.

The building was developed by A.G. Rhodes and J.J. Haverty at a cost of just under $750,000 to house their new business partnership, Rhodes-Haverty Investment Company. The two had previously worked together years earlier before splitting off to build separate furniture empires.

Unfortunately, Rhodes passed away before construction on the duo’s new building was completed. Haverty took over as the company’s sole executive until he passed away in 1929.

The Rhodes-Haverty building was acquired by Georgia Properties Company in 1946. Its new owner added modern amenities such as automated elevators and air-conditioning; the building continued operating as primarily an office tower.

In the late 1960s, the building’s first two floors were modified significantly to accommodate the arrival of men’s clothing retailer Brooks Brothers as a ground-floor tenant.

The building was sold to local developer Shouky Shaheen in 1972, then sold again to Rubloff and Company in 1978. It was added to the National Register of Historic Places in 1978 as well.

But by the early ‘80s, downtown Atlanta was entering decline and gaining a reputation for crime. The Rhodes-Haverty building sat vacant by the 1990s, as did several historic buildings in the city’s core.

The arrival of the 1996 Summer Olympics in Atlanta proved to be the spark needed to resurrect the area, though. Impac Hotel Group purchased the Rhodes-Haverty building and initiated $8.5 million in renovation efforts that converted the former office tower into a 160-suite Residence Inn by Marriott hotel.

The new hotel opened in 1996, just in time for the Olympics – it has operated successfully in downtown ATL ever since.