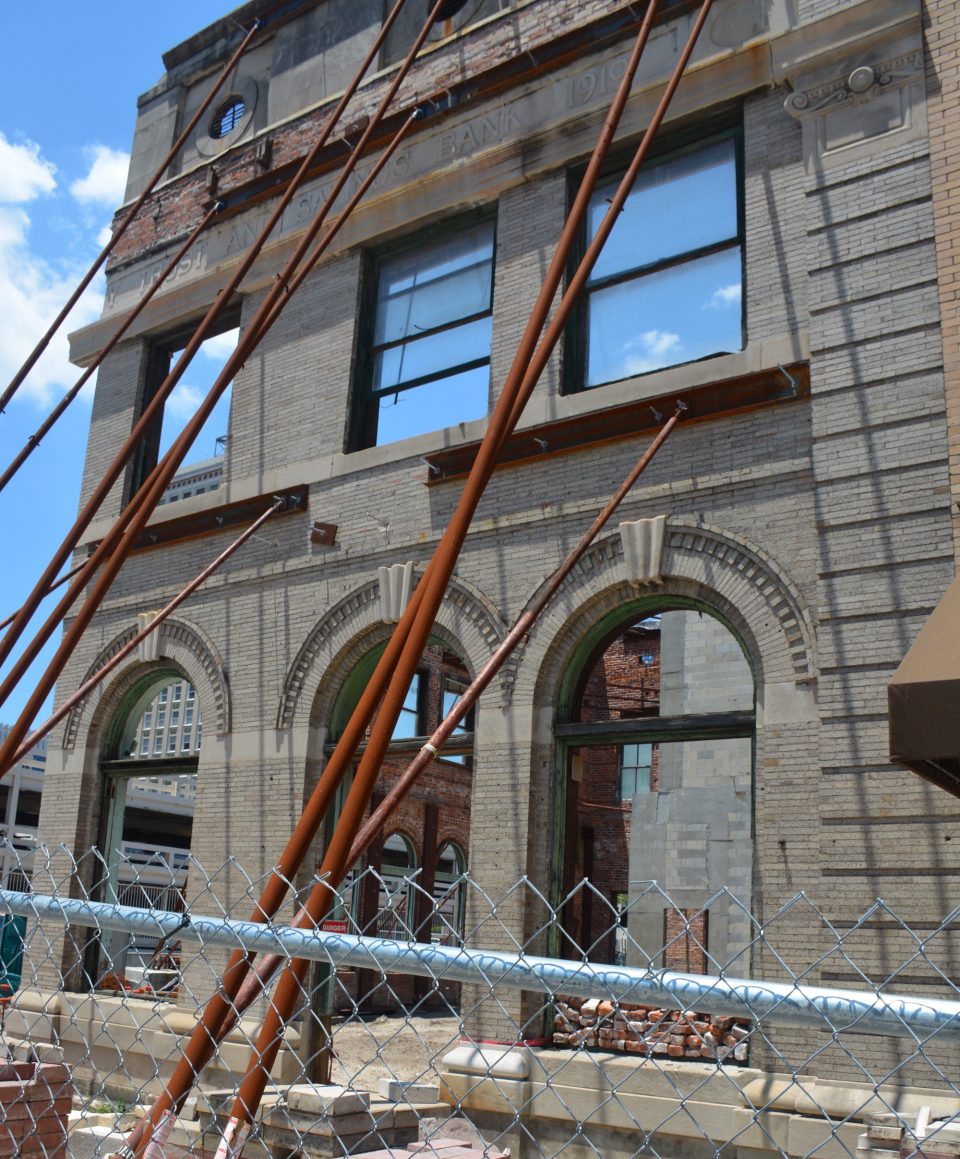 One of the most frequently debated topics in the fields of adaptive reuse and historic preservation is the practice of facadism. But just what is facadism – and why is it so controversial?

Facadism is defined as preserving the architectural details of the outside walls – or façade – of an older building, to then incorporate it into the construction of a new structure. It exists on a broad spectrum, ranging from projects that seek to reconstruct what’s left of a historic structure, to old facades plastered upon or around what’s clearly a modern building.

It’s the latter end of the spectrum that most often comes under criticism from historic preservation advocates, who feel that such projects create a false sense of history, and thereby give residents and visitors a false understanding of that history.

One example would be Chicago’s Soldier Field. The municipal stadium, built in the early 1920s and home of the NFL’s Chicago Bears, was gutted in the early 2000s with only its exterior façade retained. In its place, a modern facility was constructed within the bounds of the historic façade. As a result, the historic stadium was taken off of the National Register of Historic Places.

The Soldier Field redevelopment project came under fire for several reasons, but arguably its most egregious offense was the fact that almost no effort was made to match the new structure with the old façade. Instead, the historic façade wraps awkwardly in a U-shape around the new building, creating a bizarre mish-mash of Neoclassical and Postmodern architectural trends.

To a degree, this critique rings true even on the other end of the spectrum: reconstructing buildings that didn’t survive on their own gives the false impression that they were maintained over time and that their new iterations match what was once there, which is definitely not always the case.

There are, however, instances where facadism makes sense – usually as a last resort to save some piece of a decaying property. In these scenarios, the project leans toward the reconstruction end of the spectrum, wherein a building has deteriorated after neglect or disaster but developers wish to save as much of the structure as possible. Sometimes this is done to capitalize on tax credits for preservation, but other times it’s done as an earnest attempt to preserve some aspect of the structure’s historic design.

An example of the latter can be seen in a project we’ve written about previously: the Cowford Chophouse building in Jacksonville, FL. As we noted, it was an office building that was left vacant after a major decline in office occupancy in downtown Jax. The family that owned the building, located on a key piece of property at the northern end of the city’s Main Street Bridge, was content with letting it rot – to the point that, by the time the city took possession of the property, the structure of the building was damaged beyond repair.

After a new owner took over, efforts were made to preserve what was left of the building. Unfortunately, after demolishing the portions that were beyond any repair work, all that remained were two portions of the exterior façade – pictured at the top of the article. Those portions were preserved, and the frame for a new building was constructed to match them. The finished product closely emulated the original building, allowing at least a portion of its badly-damaged façade to live on for a modern usage.

Essentially, the line between acceptable and unacceptable in facadism comes down to two factors: intent and execution. If a project truly aims to recapture the essence of its original structure, rather than creating an anachronistic mashup of historic and modern sensibilities, it’s more likely to receive a “pass” for engaging in facadism.

But if developers are motivated more by profit than preservation, facadism is almost always a losing strategy.