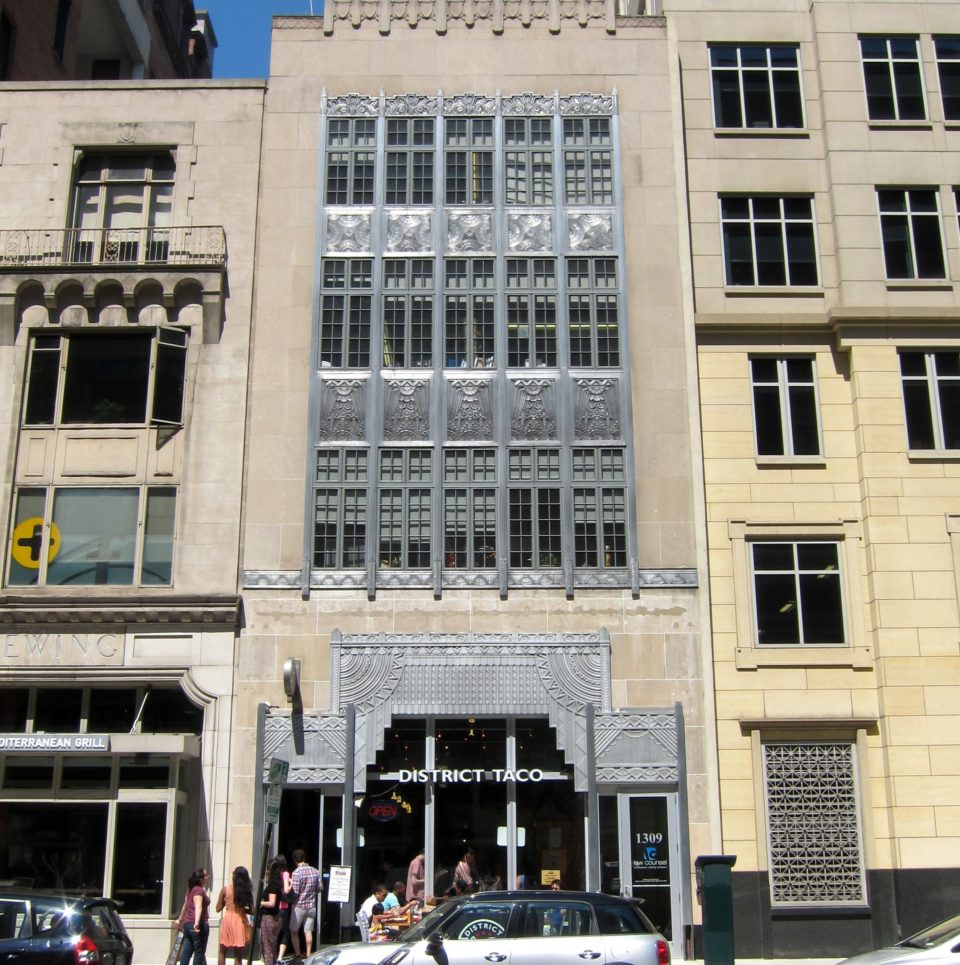 The historic Brownley Confectionery building that now houses District Taco in Washington, D.C., has served up a variety of food products over its 88-year history.

The four-story structure at 1309 F Street N.W. was originally built in 1932 to house Brownley’s Confectionery. It was one of two F Street buildings commissioned by the Brownley family, which had its existing properties demolished to make room for the new buildings. The other building, which housed the family’s fruit and nuts shop, was torn down in the ‘80s.

Architecture firm Porter & Lockie helmed the building’s Art Deco-style design. Making heavy use of ornamental patterned aluminum on its front façade, the building stood out amongst the more conservatively-designed buildings along F Street. It was one of a handful of Art Deco designs by Porter & Lockie; most of those other buildings have since been demolished.

Brownley’s occupied the whole building, with its ground floor featuring sweets for sale along with a lunch counter and soda fountains, and its upper floors housing a confectionery kitchen as well as storage and operations space.

Unfortunately, Brownley’s closed up shop after less than a decade in its new building. In its place, Mayflower Shop – also known as the Mayflower Restaurant – opened in the early 1940s. Mayflower operated for around three decades within the space, selling Mayflower Doughnuts and Maxwell House coffee. It retained Brownley’s lunch counter and soda fountains.

In 1972, the building was acquired by an investment group that made modifications to the ground floor shop entrance, adding a stucco covering over the original ornamental aluminum and limestone. A men’s clothing store briefly operated within the space during the ‘70s, but for the most part, the building sat vacant awaiting a new use.

The Brownley Confectionery building was added to the National Register of Historic Places in 1994, though it was still vacant at the time. Its NRHP entry notes the alteration of its bottom floor façade. A music store briefly opened within the modified ground floor unit in the early 2000s, but it didn’t last long either.

FunXion opened that same year, but by 2011 it had already entered bankruptcy proceedings, prompting it to close permanently.

The next year, food truck District Taco set up its first D.C. brick-and-mortar within the same unit. Its space was designed by architecture firm CORE and utilizes the ground floor, basement, and an overflow-seating mezzanine.

District Taco has thus far proven to be a lasting tenant for the building’s ground floor. Its upper floors are occupied today by Law Counsel Staffing and iostudio.