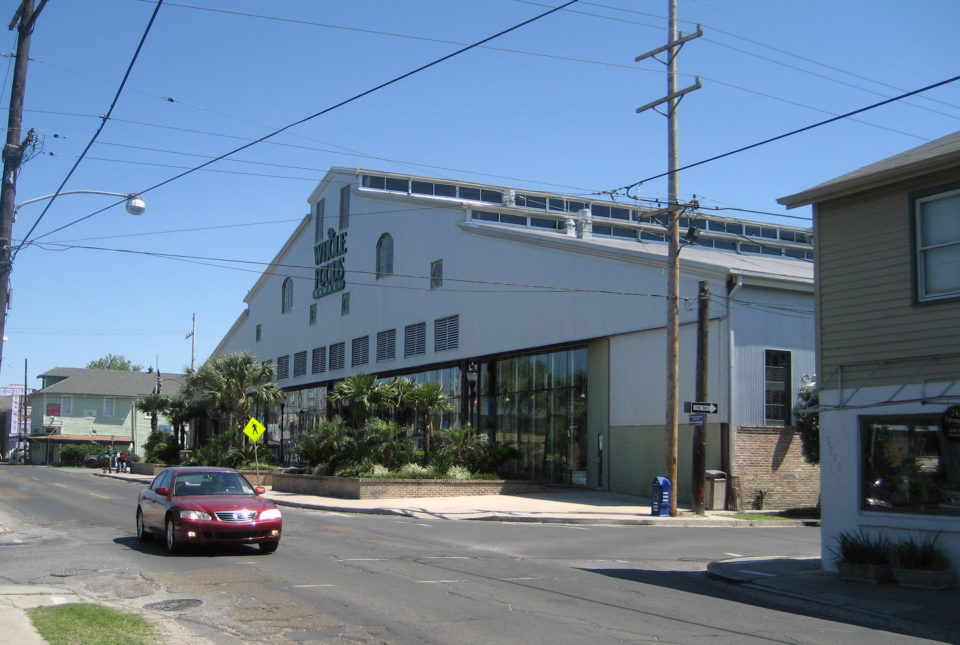 The building was constructed from 1893 to 1894 as a “car barn” to house parked streetcars for the New Orleans Traction Company. It was built by Muir and Fromherz using steel frames fabricated by Youngstown Bridge Co., as well as corrugated iron roof coverings from I.D. Fletcher & Co. which would later be replaced with composite material. Its design was handled by city engineer Linus W. Brown.

The new car barn at 5600 Magazine Street was built adjacent to an existing barn from Jefferson City Railroad Company, but the other barn burned down around a year after the Arabella Station opened.

Arabella Station served as one of the largest car barns of the extensive New Orleans streetcar system. The New Orleans system, like many others around the country, thrived for several years in the early 1900s but began to struggle with the proliferation of automobiles and buses. As a result, by 1950 the streetcar lines had been removed at Arabella Station and it had been repurposed by the city’s Regional Transit Authority to house city buses.

For several more decades, the Arabella Station kept operating as a “bus barn,” but by the late ‘90s the RTA began seeking a buyer for the property. The structure was added to the National Register of Historic Places in 1996 to ensure that its historic integrity would be retained during any redevelopment efforts.

Sarpy/Hixon Development was chosen by the RTA as the winning bidder for the project in 2001. The company quickly settled on a lease with Whole Foods Market and set about redeveloping the property in accordance with state preservation guidelines. Construction work during the renovation was handled by Malin Construction Company.

In December 2002, the new Whole Foods Market location opened its doors at Arabella Station. The store takes up 28,000 square feet of space within the historic structure. The rest of its space is used for parking, an appropriate utilization given the building’s origins.

Today, Arabella Station continues to operate with Whole Foods as its tenant. It serves as an increasingly rare reminder of the early days of American streetcar development.