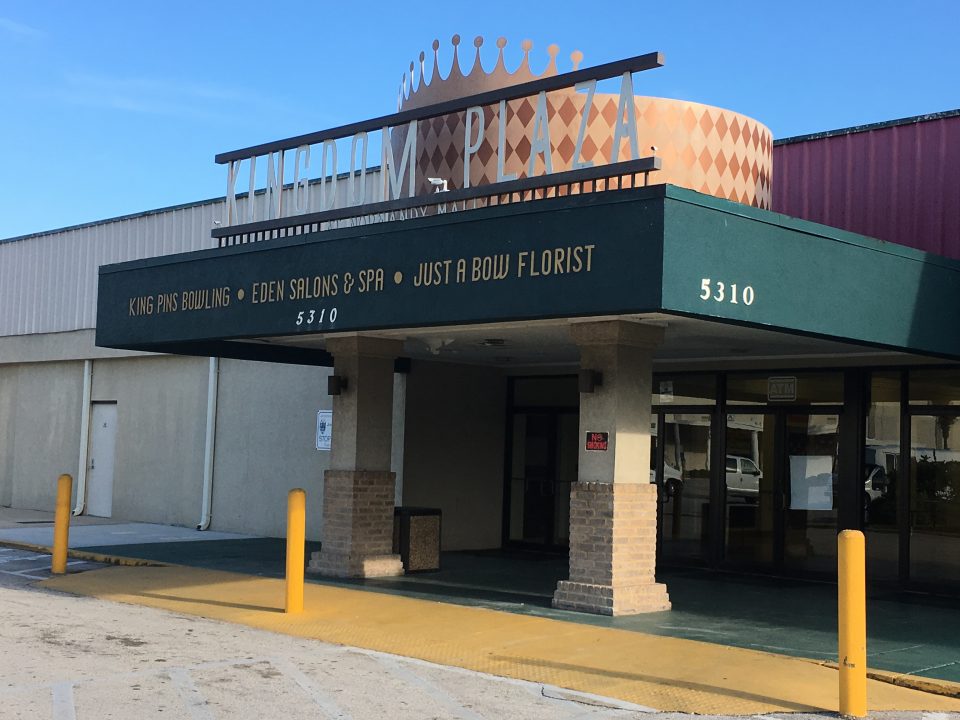 Located a little over five miles from the center of Jacksonville, FL, the structure that’s now known as Kingdom Plaza began its life as one of five shopping malls built in the city during the 1960s.

Normandy Mall began as a standalone Montgomery Ward, once a department store giant among the likes of Macy’s. Developer Ed DeBartolo spearheaded the development of an enclosed shopping mall around the Montgomery Ward, which would effectively become an anchor of the newly-formed mall.

The land had previously been the site of a drive-in movie theater.

The 371,300 sq. ft. mall opened in the late ’60s, anchored by discount department stores Woolco and Roses along with Ward. It was able to carve out a role in the crowded Jacksonville market. While its offering of stores wasn’t unique to the city, it was at least different enough from nearby neighbor Roosevelt Square Mall to warrant a trip to both on the weekends.

The mall dealt – successfully – with an anchor space opening within its first five years. Retailer Murphy’s Mart was quickly swapped into the place of the departing Roses.

Over time, the demands for shopping malls in Jacksonville began to change. It became clear that not all of them would survive, and they all had to struggle to keep up with Regency Square Mall – which at the time was the city’s most popular shopping destination.

Normandy Mall hung on longer than expected, thanks in part to being quick to fill open anchor stores. When Woolco folded, the mall brought in Sam’s Club.

Unfortunately, the one tenant it couldn’t replace was its original one. When Montgomery Ward closed in 1988, it spelled impending doom for the mall. The arrival of The Avenues shortly after definitely didn’t help matters. Stores began closing, as the areas around the mall grew more dilapidated.

The official end of the Normandy Mall came with the mid-90s closure of Sam’s Club, but by that point, the mall’s corridors were already completely vacant.

A few years later, the old Ward’s building was sold off to Sleiman Enterprises who turned it into a strip mall. The remainder of the property sat vacant and rotting.

Then, in 2003, the mall was hit with a bit of divine intervention. Potter’s House Christian Fellowship, a westside church with a large congregation, purchased the mall property for $4 million.

The church then pumped in an additional $7.5 million to renovate the mall. Part of the existing structure was demolished, splitting it into two buildings. One building, formerly the home of Woolco and Sam’s Club, would become a new megachurch for Potter’s House.

The other would become a rebuilt mini-shopping mall, building upon the original structure of the Normandy Mall. This portion officially re-opened in 2007, with a collection of tenants including a large bowling alley and pro bowling shop, a fitness center, and several other small shops and amenities.

Perhaps most notably, it featured The Potter’s House Soul Food Bistro, a restaurant run by the church that has become well-known for its amazing soul food and has since opened a second location in Arlington.

The revamped mall was given the name Kingdom Plaza.

Today, the mini-mall continues to stand and thrive. While there are a few vacancies within the miniature corridor, it’s clear that Kingdom Plaza is meant to serve more as a community center for members of the church and nearby residents.

Thanks to the work of Potter’s House, the old Normandy Mall still lives on after nearly fifty years.

Richard H. Chambers Courthouse in Pasadena Was Once a Hotel, Offices, and Even a Hospital